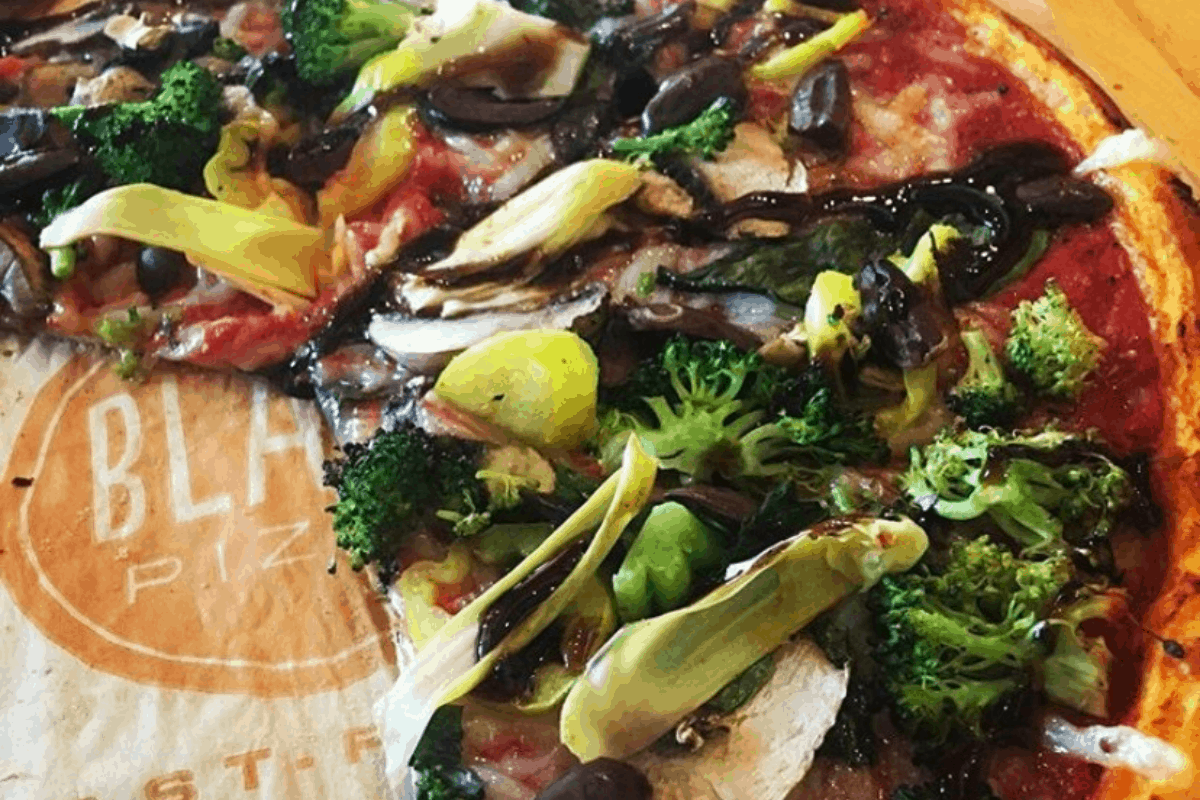 There is nothing better than a good, hot slice of pizza (or sometimes a cold slice of pizza!). You’d think at this point there would be more vegan friendly pizza chains. It’s really not that hard to do. Put some vegan cheese on your menu, like a Daiya Mozzarella, and you’re pretty much good to go. Add a good mock meat and you’re a hero.

However, the majority of the giant pizza chains have yet to make that leap. The good news is, there are a ton of chains all over the country now where you can get an amazing pie. Our seven pizza chains combine for over a thousand locations across the US so there’s a really good chance at least one of them is close to you.

The advent of the ‘create your own’ Chipotle-style ordering has been a big win for vegans. This allows you, the customer, to fully customize your order from crust to toppings and you get to watch your pizza being created right in front of you.

In addition, not only have these chains adopted vegan cheese and many of them mock meats, the ability to add as many veggies as you like is a game changer. I can still recall before I went vegan watching Jen order a pizza with just veggies that would end up being close to $20.

Blaze Pizza is the second largest of the chains on our list with over 300 locations nation wide in the US and now with a few international locations as well. Blaze pizza was the first fast casual pizza chain to adopt the ‘create your own’ pizza ordering style that mimics Chipotle. Lebron James, famously, was an early investor into the chain.

As an added bonus, the restaurant utilizes eco-friendly packaging. The pizza boxes are certified by the Sustainable Forestry Initiative and the salad containers are produced from recycled plastic.

There are a couple reasons that make Blaze Pizza one of our top pizza chains for vegans. First, they offer both vegan cheese and a Spicy Vegan Chorizo. Next, you have the ability to pick exactly what you want and have complete customization over your entire pizza from crust to sauce to toppings.

Finally, you can choose as many of the over 20 different toppings you want and it all comes to the same price. If you’ve ever had to pay “per topping” for some extra veggies, you know how awesome it is to get as many as you want for one price.

The complete list of vegan options at Blaze Pizza can be found on our Blaze Pizza Cheat Sheet or if you’d like, head to Blaze’s Official Menu Page

With over 200 locations in twenty different states there is a decent chance you’ve got a Mellow Mushroom close to you.

They have numerous specialty pizzas that can be made vegan with a simple substitution of vegan cheese. You also have the option to add seitan, tofu and even Portabello mushrooms as a substitution or just cause.

When you combine the creativity of the specialty pizzas with the flexibility to sub in vegan friendly ingredients, you really feel like you have a ton of options to to choose from.

Mellow Mushroom also has appetizers like Hummus and Bruschetta (sub the cheese), salads and even calzones and hoagies that can easily be made vegan with a couple quick substitutions.

MOD Pizza is a create your own style pizza chain similar to Blaze. In fact, MOD stands for “Made On Demand”. The chain was founded in 2008 in Seattle by the same family that founded Seattle Coffee Company that later sold to Starbucks. With over 400 locations in the US and UK, MOD Pizza is the biggest pizza chain out of our favorites.

MOD’s vegan friendliness comes from their menu choices of Dairy-Free Cheese (no extra charge) and roughly 25 different toppings of which you can add as many as you like. MOD doesn’t offer any faux meats, but they do offer some unique toppings like grated carrots, artichokes, green chiles and 5 different ‘roasted’ toppings like roasted corn and roasted garlic.

In addition to pizza they also offer Garlic Strips and Cinnamon Strips which both can be ordered vegan.

Pizza Rev made the list because of their menu options that include 3 different crusts, 4 different sauces, Daiya Vegan Cheese and Vegan Sausage Crumbles. They also have over 15 different veggie toppings including a couple unique options like roasted cauliflower and sun dried tomatoes.

Pieology is another Californian based pizza chain with over 140 locations in 23 different states. Like a few of the spots on our favorites, they are a ‘create your own’ style pizza spot.

They also, similarly, serve individual artisan style pizzas cooked on an open flame oven. Knowing that, it should come then as no surprise that the two founders of Pieology were previously involved with MOD pizza.

Pieology only offers one vegan crust which also happens to be their Gluten Free crust. While this may be a bit of a knock against Pieology they make up for not only with Daiya mozzarella cheese, but both vegan “Spicy Italian Sausage Rounds” and “Beef Meatballs”. They also have 14 different veggie toppings and five different sauces to choose from.

&Pizza is a fast casual pizza chain with 36 locations, the majority of which can be found in the northeast US. Founded in DC in 2012, their locations extend from DC up through New York and Massachusetts. They, too, are a ‘create your own’ style establishment.

However, they do make distinct oblong shaped pizzas that sets them apart from other locations among our favorites.

&Pizza’s vegan friendliness is thanks to it’s Daiya Mozzarella, Vegan Sausage and a super unique Spicy Chickpea topping. They also offer two different sauces and over a dozen veggie toppings including everything from mushrooms to broccoli. Broccoli on pizza. Who would of thought?

Brixx is pizza chain originating out of North Carolina with 25 locations, most of which are in North Carolina and surrounding states. Brixx is a dine in style pizza chain. Order from the table and your pizza is made and cooked in a wood fired oven usually located in a central location in the restaurant.

Brixx offers multiple vegan crusts and sauces and while none of their signature pizzas are explicitly vegan, there are about a half dozen pizzas that can easily be made vegan just by switching out cheeses. Brixx vegan cheese is available at no extra charge.

In addition to their pizzas, Brixx also offers an appetizer consisting of 3 different hummus, pasta and a few sandwiches that can be made vegan with a couple simple subs.

Are these the only pizza chains offering great vegan options? Of course not. This also does not even mention some of the amazing local pizza places that may be near you.

One of the best pizzas I’ve ever had in my life came from Blackbird Pizzeria, a local pizza place in Philadelphia. We are merely sharing with you some of our favorite chains, because sometimes it’s tough to know where as a vegan you can get more than just crust and veggies. (If you’ve been vegan long enough I know you’ve endured a crust and veggie pizza)

Finally, what if you do find yourself with friends and family and they’re ordering delivery from one of the big chains?

Don’t worry, we’re still here to help. VeggL has vegan guides for Papa John’s, Domino’s, California Pizza Kitchen and Cici’s. You probably won’t be able to get the exact pizza you want, but we’ll help you navigate through what crusts, sauces and toppings are vegan.

link to Does Pizza Hut Have Beyond Meat?

*UPDATE: They did. We learned in January 2021 that the Beyond Meat Sausage at Pizza Hut was a limited time offer.  We started noticing and hearing from VeggL'ers that Beyond Meat was...