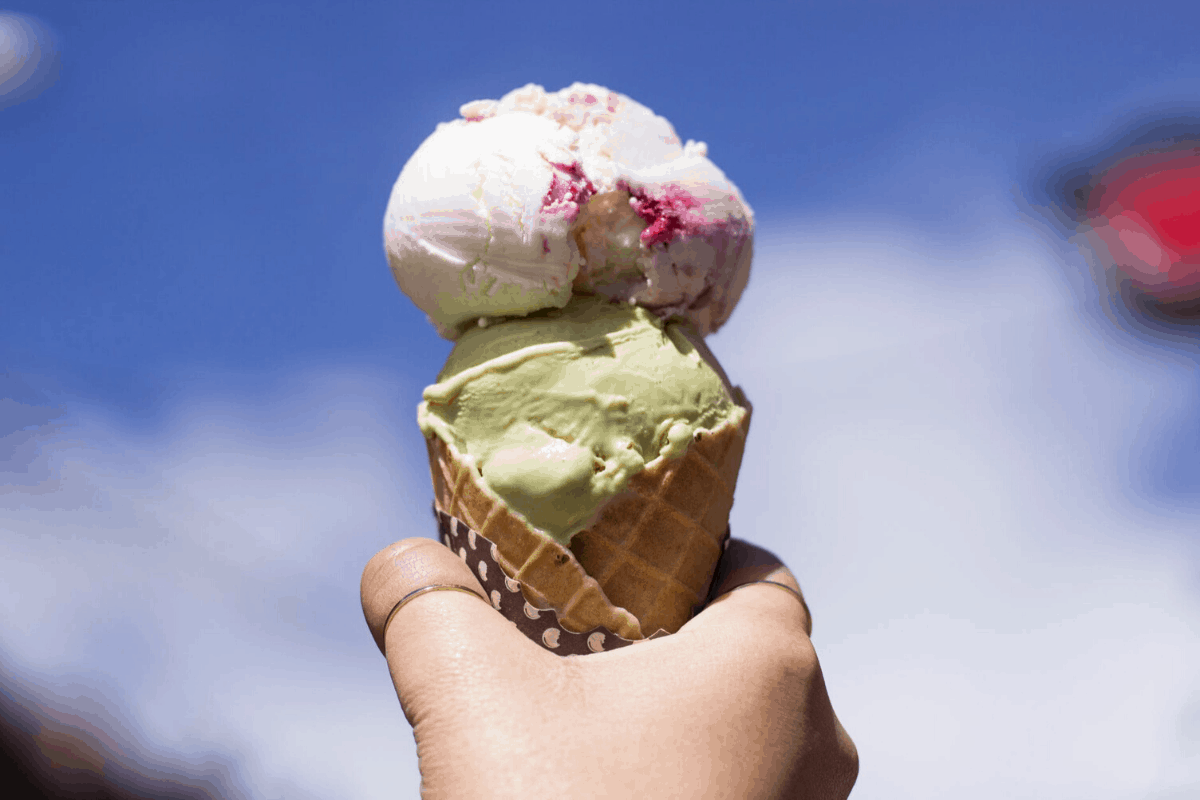 The vegan ice cream section at most grocery stores seems to be growing by the day. But, what if you want to grab dairy free at a ice cream shop near you? Maybe you want to stop and get a cone after a movie or get a couple scoops or a Saturday afternoon. What places are serving great dairy free ice cream?

We’re going to tell you about where we feel are the best six places with dairy free ice cream. All the places in this article are chains. You may have a great local shop that serves dairy free ice cream and if you do, by all means, go there. Honestly, though, those are pretty hard to find.

The chains we have on our list have locations all over the country (all over the world for that matter), so there’s a good chance one of these places is close to you.

Before we get into that, we want to answer a question we get quite a bit.

For the basis of this article, all the dairy free ice creams mentioned here are vegan as well.

Ben & Jerry’s tops the list with the most dairy free ice cream flavors. They currently have 13 dairy free flavors and are releasing a few new dairy free pints at the time we’re writing this including a Netflix and Chilled peanut butter and pretzel flavor (Update: It’s out now and it’s AMAZING!).

In addition to a ton of vegan ice cream flavors, the sugar cones do not contain any animal products and Ben & Jerry’s can also create for you a vegan ice cream cake upon request (check with your local scoop shop).

With over 8,000 locations worldwide, around 2,500 of those in the US, Baskin Robbins is easily the largest chain on our list. In fact, they’re bigger than all of the other chains combined. Their parent company is Dunkin Brands, which will make sense to anyone who has come across a Dunkin Donut & Baskin Robbins combo store.

In 2019, Baskin Robbins began adding vegan and dairy free options to their menu. They have two dairy free ice creams now, Chocolate Chip Cookie Dough and Chocolate Extreme. In addition to vegan ice cream they also have Ices and Sorbets that are vegan as well.

Creamistry is the first of two nitrogen ice cream shops on our list. At creamistry you pick your ‘base’, they have three non-dairy bases. coconut, cashew and a pineapple sorbet called nitrodole.

Then you pick from over 20 different vegan flavors and toppings and once you have everything exactly how you want it, they use liquid nitrogen to “instantly freeze each ice cream order, resulting in a decadently rich and luxuriously creamy ice cream with virtually no overrun.”

Creamistry has over fifty locations stretching across the southern US stretching all the way from Los Angeles to Savannah, Georgia.

They also have over a dozen Italian Ices and Sorbets that are vegan as well.

Bruster’s is an old school, walk up to the window, type scoop shop. They make all of their ice creams fresh, right on site. Bruster’s are now located in 21 different states and even has a couple international locations.

While not as widely available as Ben & Jerry’s and Baskin Robbins, Bruster’s also sells their pints nationwide. So, if you don’t have a Bruster’s close by, take a look at your grocery store and maybe you’ll get lucky there.

Jen is a huge fan of Jeni’s and did a full review of Jeni’s Roasted Peanut Butter & Strawberry Jam.

They have five different dairy free ice cream flavors and a dairy free sorbet. Three of the five ice creams and the sorbet are also gluten free as well. If you don’t have a Jeni’s scoop shop near you then try your grocery store. Jeni’s pints have been rapidly expanding and showing up in more and more grocery stores.

Sub Zero is the second nitrogen ice cream shop along with Creamistry. They have a vegan dairy free base that you can then add flavors and mix-ins at your desire. Sub Zero was founded in 2004 and now has over 50 franchises in the US and a couple international locations as well. They even appeared on Shark Tank in 2013.

Sub Zero excels at the amount of vegan options that they offer. Sub Zero’s options can vary by location, but all will offer at least one of four (many locations carry more than one) different non dairy bases – coconut, almond, cashew or oat milk. Then you can pick from over 50 different flavors and toppings which leads to a near limitless amount of combinations.

So, if you’ve been keeping track, you’ll know that this is actually number 7. That’s because while Orange Leaf doesn’t have ice cream, they do have some great dairy free yogurt options. They have about a dozen flavors of each that are made with almond milk. If you’re getting frozen yogurt they have over 200 different toppings.

They also have about a dozen smoothie options that can be made with almond milk.

Orange Leaf has as many locations as they have toppings, with over 200 locations in the US and Internationally. So, if you’re willing to go with yogurt in place of ice cream, then Orange Leaf is a great option to go with.

This. Is. New. Dairy Queen recently released non-dairy Dilly Bars. They are essentially the old-school chocolate coated ice cream on a stick and they are amazing.

We both them so much that not only are they one of our favorite dairy free ice cream treats, they’re one of our favorite vegan fast food options, period. If you’re feeling extra nostalgic, you can also opt for one of the Star Kiss bars (also pictured above).

We’ve highlighted some of the best places with dairy free ice cream, but there are still some very popular ice cream shops that still don’t carry non-dairy options. If you have one of these locations near you reach out to them and let them know that you’d like to see dairy free options in their stores!

One very popular brand that we’ve yet to mention is Haagen-Dazs. Haagen-Dazs has a few dairy free pints that you can pick up at grocery stores, but currently only offers one of the those flavors (Chocolate Salted Fudge Truffle) in their stores.

One option definitely isn’t enough to make the brand one of our ‘best’, but you can get a scoop there if that’s the best you’ve got where you live.

Dairy free ice cream is growing at a tremendous clip. Just within the last year two of the bigger ice cream chains in the country, Baskin Robbins and Bruster’s, have joined in on the dairy free movement. We expect to see this trend continue to grow as more and more businesses come to realize that there is a strong demand for ice cream without the dairy and eggs.

We hope you found this info helpful for the next time you’re out and about and looking for a place to grab a couple scoops. Lastly, please don’t forget to look for local ice cream shops that may also offer dairy free options as well.

Have you heard of Vegancuts? Are you vegan and aware that there is a subscription box you can have delivered to your door each month... with ALL vegan goodies?  Vegancuts sent us their snack...

Jen and I have been living in Georgia now for a few years and QuikTrip is one of the most popular gas stations around us. We both love QTs because they're always clean, the staff is generally very...