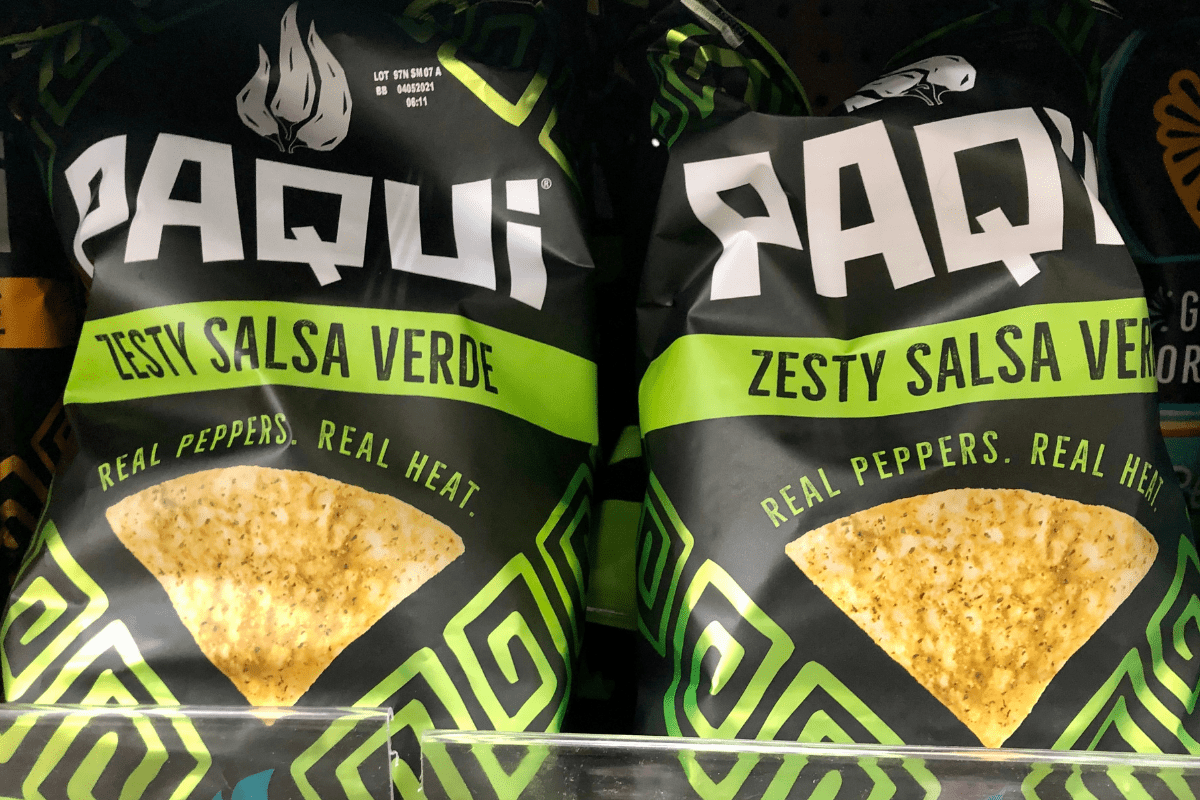 Potato Chips. Those should all be vegan, right? If you’re a seasoned vegan then you know the answer to that is a hard no. Many of the seasonings and flavorings that go on chips contain dairy. Some of those make sense, but sometimes chips seem to include dairy for no discernible reason which can be maddening at times.

This Ultimate List is every chip that we are aware of that is vegan. You can use the chart both as a resource to check if you have a question on a particular chip and a guide for new chips that maybe you haven’t tried. It includes both intentionally vegan brands and varieties as well as ‘accidental’ vegan options.

We are intentionally using the term ‘chip’ instead of ‘potato chip’ because there are many different varieties of vegan chip using unique ingredients like beans or quinoa for example. The list does not include puffs, popcorns and pretzels – those will all get lists of their own soon.

Our chart also includes other details that many of us consider important when it comes to our grocery shopping like GMOs and official Vegan certification. We also include links to store locators where applicable to help you find some of the more unique brands on the list. We’re going to assume you don’t need much help finding Lay’s or Doritos.

Finally, if you’d like more info on the brands and varieties contained within our chart scroll below where we provide you with more information on each brand.

I got a bit of a laugh on this one. Who would have thought that 7-11 is a great place to grab a bag of vegan chips? Five different varieties of the quick stop convenience stores’ brand chips are vegan. Making things even more interesting, 2 of the flavors are actually named after meats. Isn’t it ironic, don’t ya think?

All nine flavors of beanfields chips are Certified Vegan, Non-GMO and Gluten-Free.

Beanfields are unique in the fact that they are made from beans. By using beans as the source of their (delicious by the way) chips, they use less water and fertilizer to produce their chips. You also get the added benefit of a protein packed snack.

Boulder Canyon chips are part of the UTZ chip family. So far we’ve been able to confirm that their Jalapeno Avocado Oil flavor is vegan. It’s also Non-GMO certified. Most of their flavors (if not all, we haven’t confirmed yet) seem to be Non-GMO certified.

Cape Cod chips started out as a small business storefront in 1980. They have grown in popularity over the years by making quality chips with quality ingredients. Not all of their chip varieties are vegan, but a few of them are. All of their chips contain no artificial ingredients or preservatives. Even better, their Original variety come with the official Non-GMO stamp.

Two other flavors, Blaze, which is more recent and Toasted Corn, which I’m not too familiar with to be honest, are also vegan. So if you want to put some chips out for your omni friends that are weirded out by your “organic foo-foo” chips – put out some of these Doritos for the big game and feel good doing so.

Earth Balance is probably better known for it’s vegan butter and snack crackers. At least that’s what I knew them better for. This was one of the vegan chips that I didn’t even know existed until I started researching for this article.

We use their vegan butter, I love their snack crackers so I can’t wait to try out their chips as well.

The Forager Project is a 100% organic, plant-based Non-GMO company. If you’re vegan, you may recognize their name from the yogurt and sour cream that they make.

They also make five varieties of chip packed with leafy greens, ancient grains and root vegetables that come together to create not only a tasty snack, but something you can feel good about putting in your body.

Garden of Eatin’ was founded in 1971 by Al Jacobson. Garden of Eatin’ has been focused on producing natural and organic products. Al was a vegetarian himself and all the varieties of Garden of Eatin’ that we looked at are vegan with the exception of the Sweet Potato chip which contains milk.

The ultimate chip for scooping has some vegan varieties including Original, Lightly Salted and their signature Scoops!. So, break out the salsa and guacamole and pour out a big bowl of fritos.

If you’re not from the Cincinnati area, you may have never heard of Grippo’s. But, if you are, then you know Grippo’s are the bomb! Jen grew up a little north of Cincinnati and was indoctrinated with the awesomeness that is Grippo’s.

For me, I mean they’re good, but I think it’s a nostalgia and regional pride thing. Whatever the case may be, Jen was super fired up when she learned that Grippo’s Bar-B-Que chips are vegan. So enjoy Ohio vegans!

In 2006, Kettle Brand become the biggest natural brand of potato chip in the US. You can find Kettle Brand chips in pretty much every grocery store across the country.

Out of all the popular established brands of potato chip, Lay’s by far has the most vegan options. All of them are what we refer to as “accidentally vegan”, meaning they are not vegan certified and they were probably not designed specifically to be vegan, but yet they are. That’s great news for vegans (except maybe vegans on diets?).

While many name brand chips have milk included in their chip varieties that doesn’t make sense, Lay’s has seemed to be able to avoid that annoying aspect.

Munchos is a Frito Lay brand of chip whose Original and Flamin’ Hot varieties are both vegan.

Frito Lay is a behemoth in the chip aisle. Frito Lay brands include Lay’s, Doritos, Cheetos, Fritos, Sun Chips, Munchos, Miss Vickies, Tostitos, Funyons, Ruffles and Sabritones. The first time you become of aware of the fact it can come as quite a shock. If you’re into supporting small and local businesses, it’s safe to say Frito Lay is not that business.

There’s a chance you’ve never heard of Paqui chips before. However, if you’ve heard of the “One Chip Challenge”, then you’re actually quite familiar with Paqui.

The “One Chip Challenge” is Paqui’s signature Carolina Reaper chip. It is so hot that it comes with just one chip in the package. Before you decide to take the challenge yourself, we recommend looking up the #onechipchallenge hashtag on social media. This chip is no joke.

Paqui makes a full line of chips, about half of which are vegan. They have a variety of different flavors with different levels of heat, but are probably best known for chip flavors that bring some serious heat.

Pop Chips are different than regular potato chips because instead of being fried, they’re pressurized which cause them to “pop”. The result is a chip with all the flavor, but with half the fat.

Three flavors of pop chip are vegan, including one of our personal favorites, barbeque.

Do I really need to explain Pringles to you? They come in a can and once you pop, you can’t stop. Some of them, it turns out, are vegan.

El Sabroso Salsitas is a Snak King brand. The brand was born in LA with the vision of bringing the flavors of Mexico to people everywhere.

One of my all-time favorite chips pre-vegan was the Garden Salsa Sun Chips. Loved them. Unfortunately, the Garden Salsa flavor along with most of the flavors of Sun Chips contain milk. However, the Original flavor is vegan and they’re still a great lunch time chip with a sandwich.

Ruffles is one of the most well known brands of chip in the US (also a Frito Lay brand). A few of their flavors including their All-Dressed variety are vegan. Ruffles is one of those brands that I can pick up for my Dad when he comes to visit. I don’t mention that they happen to be vegan and everybody wins.

Did you know Taco Bell made chips? I honestly just learned that while researching for this article. Apparently they’ve been out for awhile too. In the Spring of 2018 Taco Bell rolled out chips based off their iconic sauce packet flavors. As luck would have it, three of the flavors Classic, Fire! and Mild are vegan.

Now with this new found knowledge I’m actually looking forward trying a bag of Fire! chips. It’s my go-to sauce when it comes to my fresco style Bean Burritos (Check out all the Vegan Options at Taco Bell) so I’m really intrigued how it tastes as a chip.

Takis are a rolled corn tortilla chip that comes in multiple bold flavors. About half of their varieties are vegan. This is another chip that both of us have always bypassed in the past because we just assumed that they weren’t vegan. Some of their flavors bring some serious heat, which is right up my alley. Can’t wait to pick up a bag of these soon.

Terra is a completely vegan, Non-GMO company. They use tons of different and unique vegetables to make up their tasty and colorful chips. The vegetables they use range everywhere from carrots to kabocha, which is japanese pumpkin.

Zapp’s is part of the Utz family of products. They are a New Orleans Kettle Style potato chip. While they aren’t vegan certified or even Non-GMO for that matter, most of their flavors of chip are vegan. They’re also delicious too!

There are plenty of vegan chip options out there. You can pick up a vegan certified, Non-GMO chip that aligns with your taste buds as well as your values. Or, you can also pick up a guilty pleasure, “accidentally vegan” chip. We’re not here to judge.

We just hope that this list has helped you navigate the chip aisle in the grocery store.

Finally, let us know who we missed! If you know of a great vegan chip out there that is not on our list, please contact us and let us know!

When doing our research to provide you with what options are vegan, we do come across ingredients that can be confusing. Some may even make you question why you didn't pay attention more in Human...