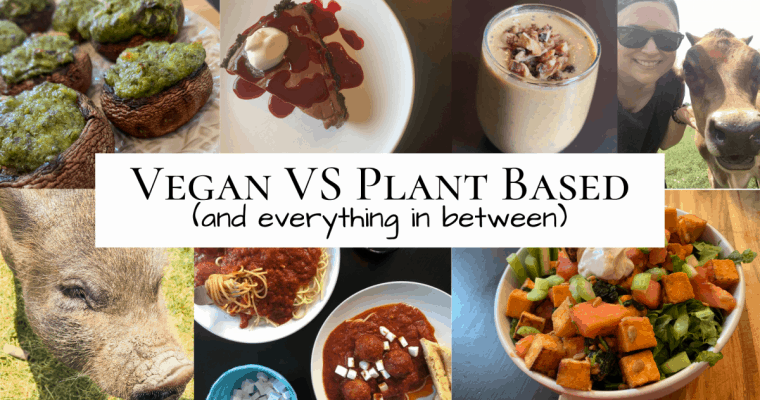 What Is Vegan vs Plant Based vs Whole Food Plant Based vs Raw Vegan vs Vegan Keto? Did you even know that all of these existed? This question gets asked a lot and I can see why people are incredibly confused.

Veganism is the belief that we should not exploit animals for our gain. The person who believes in veganism does their best to not consume, wear or use any product that contains animal or animal by-products.

Plant Based is the person who does not consume animals but may not believe in the ethics or environmental reasons for why vegans do not eat meat.

Whole Food Plant Based is a specific idea of how to eat for health–preventing and reversing diseases. Vegan Keto follows the plan of eating high fat low carb to obtain a state of ketosis–but without the large amounts of animal products keto is highly associated with.

Raw Vegan is the practice of eating raw and living plant foods while not heating them above 118 degrees.

If you still have questions, let’s dig a little deeper.

Think of Veganism and Plant Based as being an umbrella over 2 similar but different ideas. Let’s call the others sub-categories.

Veganism is the belief that we should not be consuming, wearing or utilizing products that contain animals. Generally people follow this lifestyle because of their ethical points of view of not exploiting animals when it is unnecessary to do so.

Our hearts are open in a different way that sees that pets, like dogs and cats, are no different than ones that are killed for food, like cows, pigs, chickens and fish.

For instance, my heart literally aches when I hear people talk about eating animals or I see it. It’s like I can envision and feel what the animal went through for this person to consume it. Vegans tend to open a path of empathy within themselves that others may not feel.

Climate Change and the Environment have always been a reason for following a vegan lifestyle; however, very recent scientific information has this piece of the movement growing rapidly.

According to NASA, 97% of scientists agree that humans are causing global warming and climate change.

From research, my understanding is that global greenhouse emissions need to fall 40%-50% in the next decade–factory farming/consumption of animals needs to shrink, forests and land covered in other vegetation need to significantly increase and we need to eat more local (to reduce gasses from transportation).

Climate Change is effecting farmers’ farmland which is leading to more land being cleared as well. The cycle will only continue if we don’t do anything about it.

If you didn’t find veganism through the ethics side of it, more than likely health was your gateway.

Raw Vegan is believing in the same philosophies as veganism but taking it to another level–being mindful of the preparation of the foods to retain optimum enzyme vitality. Raw foods are not cooked above the temperature of 118 degrees.

There are many different methods of presenting raw / living foods and it’s incredibly easy to incorporate raw foods into your everyday eating without it just being about a chopped salad. –>although, pre-vegan my salads were boooooring, not so much anymore! 😉

Other techniques would include:

Raw Vegan has a much bigger window to be creative in than most would think!

Vegan Keto is the same philosophy of eating vegan with the added plan of eating high fat, moderate protein & low net carb. This is a much newer way of eating in the vegan world and is the most controversial I would say.

Most doctors I have read that are in agreement of this way of eating, have prescribed to patients or eat this way themselves, because of metabolic issues. They struggle to lose weight, have focus and energy all while having tried high carb low fat or just a traditional vegan diet.

What Vegan Keto looks like is different for everyone. Some will stick to 20 net carbs per day while others who are fat adapted can go much higher. Electrolytes (potassium, magnesium, sodium) are mandatory–and I don’t mean that packet of electrolyte drink will do. Keto flu is real if you do not hit your electrolyte numbers.

Chronometer will become your best friend. In the beginning, you must calculate your macronutrients. When I have done vegan keto, I also tracked my micronutrients to ensure I was getting proper nutrition.

In all honesty, most foods can be considered vegan keto as long as they are vegan and fit within your allotted macronutrients.

As I said before, Chronometer will be your best friend to begin. Below are Vegan Keto recipes I have made! Kung Pao Tofu, Buffalo Tofu Bowl & Chia Seed Protein Pudding Recipes

Maybe you’ve been avoiding animal foods but are not on the level of calling yourself vegan yet …or maybe never will. Plant Based is the perfect term for you. It’s safe.

Sometimes new vegans are not comfortable with calling themselves vegan because you aren’t comfortable with talking about it yet. You’re still figuring it out. Don’t put the pressure on yourself to have to have a label.

If someone asks what you eat, tell them you’re plant based–no animals or animal by-products including eggs & dairy.

Or, maybe you’re here for health reasons and never have any intention of switching your leather purses to faux or check the ingredients on your soap to make sure there’s no animal glycerin. If that’s the case, again, plant based is for you!

With this surge of more vegan/plant based products hitting the grocery stores and restaurants, DO NOT take the words, “plant based” at face value. Always check the ingredients!!

That phrase is being used to promote products that contain plants but may also contain animal by-products, like eggs & cheese.

Whole Food Plant Based is an umbrella term for the idea of eating whole unprocessed foods with no oil to prevent and reverse diseases, like heart disease. T. Colin Campbell, claims to have coined the term in 1980.

Research on this way of eating dates back to at least the 1970’s. The pioneers of this research include:

I call Whole Food Plant Based an umbrella title because ultimately the goal is to eat foods in their whole unprocessed form but each doctor has his own specific differences and some even have a specific name for their philosophy.

The foods consist of:

The goal for every one of these doctors is to help you be the healthiest you can be–prevent and reserve diseases.

this article cleared up any confusion you may have with the differences in a vegan lifestyle, being plant based and everything in between! Just know that no matter which category you feel like you fit in, there is room for EVERYBODY. Never let anyone tell you you are not plant based enough or vegan enough–you’re on your own journey!

Keep learning & strive to do better for yourself, your family, the animals and the planet each and every day.

How sweet is it that Dunkin' has created a Valentine's Day menu and even sweeter that we have veganized it for you! What Is On Dunkin's Valentine's Day Menu? These are the menu items that are being...

Continue Reading
link to What Happened to Panda Express Beyond Orange Chicken?

Yesterday, while updating our article on the 14 Best Vegan Fast Food Options in 2023, I happened to look on Panda Express' website to confirm that the Beyond Orange Chicken* was still...