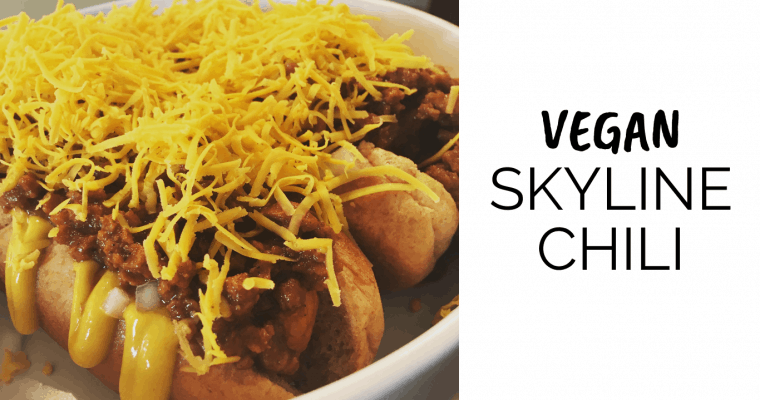 Why vegan skyline chili? I don’t know if it’s all the moving around my husband and I have done for the past 16 years or that this is the last year of my 30’s, but I’ve been feeling very nostalgic lately; movies, music, amusement parks and food.

I am aware amusement parks is a random throw in…I’m an adult kid when it comes to rollercoasters. Love them!

I grew up in Ohio and remember visiting Cincinnati back when Skyline Chili wasn’t a canned food or frozen box in your local grocery store. It throws me for a loop every time I see it in an aisle.

And now I’m a Vegan! To be fair, I have been Vegan for over 7 years now but that doesn’t mean that nostalgic taste of a Skyline Coney or the smell of the chili leaves my senses.

Why haven’t I tried to make it before? I have no idea… but maybe it’s the nostalgia that’s been playing with my mind lately making me want to now.

The History Of Skyline Chili

It was made with traditional Mediterranean spices and served in their hot dog stand called Empress.

After customer feedback, the chili, which was once cooked with the spaghetti, was changed to be more of a sauce to top the spaghetti and hot dogs.  Grated cheese was later added.

The “Way” system was also originated by these 2 brothers, Tom and John, to make ordering more efficient. From what I gather the secret recipe stayed a secret but amongst the restaurant Empress and everyone who created a business out of their original recipe thereafter.

In 1949, a former employee of Empress, Nicholas Lambrinides, started Skyline Chili. He was 70 years old. Many other Cincinnati Chili type restaurants came from Empress, including Gold Star Chili.

How Did I Create My Recipe

After reading the labels on the canned Skyline Chili, the frozen boxes, the Skyline website, other peoples versions of the recipe and Wikipedia, I found that I was going to have to combine and edit all of these ingredients.

For instance, homemade versions of Skyline Chili tends to be soupier, have cocoa in it and no paprika.

As we all know, who have actually been to Skyline Chili, their chili is NOT soupy–like I mentioned earlier–it’s more of a topping. Cocoa was never put in the original recipe. And paprika is on the ingredients list from the canned/frozen product.

Please people, do not call it Skyline Chili if you really aren’t doing it at least semi-right….

:: For the BEST tasting Skyline Chili, allow to cool, refrigerate overnight & warm up the next day. This allows the flavors to continue to marry.
Tried this recipe?Mention @VeggL_VeganEats

and let us know how it turned out!

I have had omni & vegan reviews from those that KNOW Skyline. I’m told this is LEGIT. I agree!
-Jen

How sweet is it that Dunkin' has created a Valentine's Day menu and even sweeter that we have veganized it for you! What Is On Dunkin's Valentine's Day Menu? These are the menu items that are being...

Continue Reading
link to What Happened to Panda Express Beyond Orange Chicken?

Yesterday, while updating our article on the 14 Best Vegan Fast Food Options in 2023, I happened to look on Panda Express' website to confirm that the Beyond Orange Chicken* was still...