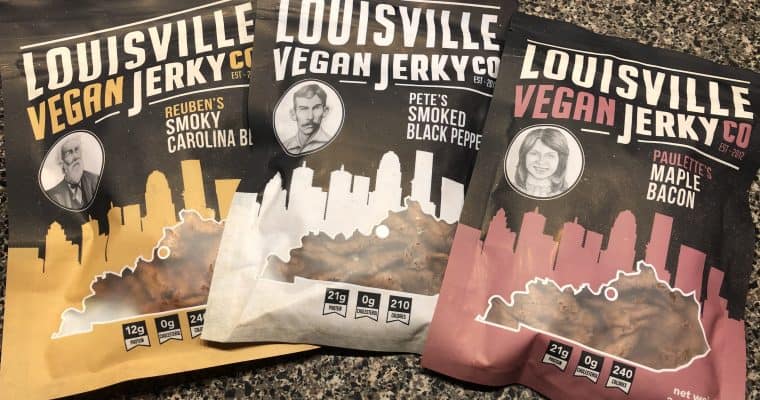 First off, thank you for checking out our first vegan product review – a vegan jerky review! I decided to start with a product I’ve seen and been wanting to try out, the Louisville Vegan Jerky Co vegan jerky.

A quick note before we get started – we will never give out positive reviews just because someone sent us free stuff or wanted to sponsor us. If those things happen, we’ll be fully transparent about it. Having said that, if you have a product and would like to send us free stuff, send away!

VeggL is reader supported. This review contains affiliate links which means if you make a purchase through these links we may, at no extra cost to you, receive a small commission.

So, without further ado…

We tried all five flavors currently available for this vegan jerky review. Reuben’s Smokey Carolina BBQ, Pete’s Smoked Black Pepper, Paulette’s Maple Bacon, Perfect Pepperoni and Buffalo Dill. I picked them up at Whole Foods for $6.99 a bag. A little expensive, but pretty on par for a bag of jerky.

Each jerky is made from textured soy protein and then each is flavored with it’s own unique combination of spices and flavors. As you can see from the following table, each is slightly different when it comes to calories, protein, etc. but they are all relatively close.

The Smokey Carolina was by far my favorite. I could have easily tore through the entire bag. (Ok, I did eat the entire bag) It has a sweetness and a strong vinegary tang. It is a punch of flavor with every bite. The texture is a bit more chewy than a regular jerky this, but this is the case for all the flavors.

The Smokey Carolina was the only flavor that left me wanting to wipe my hands off from the ‘sauce’. Something to keep in mind if you’re on the go.

Slim Jims. If you liked Slim Jims before you made the switch to vegan then this one is probably going to be the one for you. It has a subtle peppery taste… wait why am I even bothering – it tastes like a frickin’ Slim Jim. Just without the grease.

We also had a sense that the Black Pepper could be considered the Original, in the sense that it doesn’t have any overwhelming flavors or heat. Finally, this flavor has a dry texture to it that is more akin to what you would expect with an actual jerky. This flavor tied with Maple Bacon as Jen’s favorite.

Remember when you were growing up playing little league, and you’d get the shredded jerky in a can. You’d put it in your back pocket so it looked like you had a can of chew like the big leaguers. No? Just me? Alrighty then, moving on.

Well, if you DID try that jerky in a can (do they still make that?) the taste will take you right back to those days on the little league field.

The maple bacon flavor definitely comes through, but it’s not overpowering. It’s not really dry like true jerky, but it’s not juicy either. It’s somewhere in between – kind of hard to explain. I’ll just say this, it’s delicious.

We both loved the Maple Bacon and it tied with the Black Pepper as Jen’s favorite of the bunch.

We decided this would have been better labeled ‘spicy pepperoni’. It doesn’t taste like the pepperoni that I remember stealing from the fridge and eating straight from packet as a kid. This is definitely the grown-up spicy version of pepperoni.

The spice has a black pepper flavor to it and it’s a slow, creeping heat that really sneaks up on you. Before you know it though, your whole mouth is filled with black peppery heat.

This is probably the driest of the five flavors (Black Pepper close second), but in a good way. It’s the closest to actually having that dry beef jerky texture.

The Buffalo Dill definitely stands apart from the other four flavors. There is no subtleness whatsoever with this one. It is a full-scale explosion of buffalo flavor from the second it hits your taste buds. That pure buffalo flavor that you’d expect from a buffalo wing (vegan wing of course) is the star of the show here.

Then, on the back end, the dill flavor makes an appearance for an odd, but delightful combination.

The Buffalo Dill has a similar texture to the Maple Bacon (not as dry as the pepper flavored jerkys) and is saucy. Not quite as saucy as the Smokey Carolina, but it’s easily second.

Have Your Own Taste Test

There really are no bad flavors of Louisville Vegan Jerky. So why not do your own taste test?

The easiest way to do so is to order your own variety pack which you can pick up right off Amazon.

Really enjoyed all five flavors of the vegan jerky. Would I buy again? Yes! Absolutely. I’ll probably grab a bag of Louisville Vegan Jerky about the same way I bought jerky pre-vegan. Once in a while as a snack. They’re really good, but at $7 a bag it’s not something I can see myself buying on the regular.

For most people when they choose to go vegan they struggle with giving up cheese, their favorite sandwich with bacon and ranch or something similar. I’ve been a Strength and Conditioning Coach and...