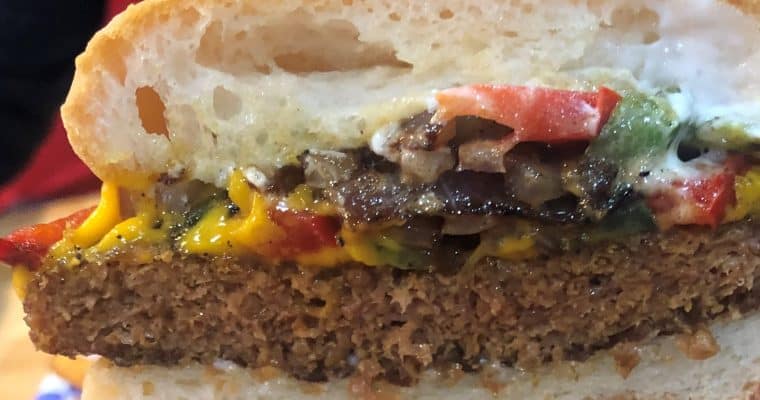 The Showdown. A Black Bean Burger vs The Beyond Burger

As a vegan for over 7 years, I never would have thought vegan burgers would be at the level of tastiness as they are now. I mean, I didn’t go vegan because I didn’t like the taste of meat, I initially just didn’t understand why we ate animals so I stopped eating them. My reasons have evolved since then. When I look back at myself as a vegan beginner I had to succumb to making bean burgers–and not very well, mind you. They would either be lacking taste or would fall apart. I was also trying to appease my meat-eating husband at the time(he’s now the beginner vegan–but doesn’t cook). It was basically a disaster. I was fine with eating them but never said in my Jules voice from Pulp Fiction, “this IS a tasty burger!” Until now…

My husband and I recently moved to Georgia and have been on the hunt for vegan options in the area we live. I stumbled across a few highly rated reviews for a small and local burger joint in a shopping center in Marietta. I checked out the website & low and behold there are vegan options. They’re even notated on the menu!

When we arrived, we quickly noticed the smiles of the owner & daughter greeting us and asking if this was our first time. We said, “of course–that obvious?” I first let them know we are wanting the vegan options and asked a couple questions about the Black Bean option as it is on the menu because the website has it listed as vegan but the ingredients listed did not coincide with the vegan ingredients. You have to order the Black Bean Burger as a Create Your Own to be made Vegan and the Vegan’s Delight Burger is as is.

We both ordered the meal, which included a side & drink, then split everything.

The Vegan’s Delight as is, which is a Beyond Burger, vegan cheddar cheese, grilled onions & grilled peppers. We added vegan mayo as well.

Our food arrived quickly and looked awesome. Other than a few other people eating in & walking in to pick up food, they were not busy.

We cut the two sandwiches and gave each other our other halves. The Black Bean was definitely a bit messier and even falling apart. I have always been more likely to eat the food I don’t think I’m going to be as big of a fan of first so I can save the best for last, but in this instance I already had the Vegan Delight in my hand. It was delicious–just as I have come to enjoy the Beyond Burger the few times I have had it. In the meantime, my husband had the Black Bean burger in his hand so this was his first bite. He was raving about it… I was shocked. He kept saying he thought it was the vegan provolone cheese–we both have never had a vegan provolone before. I put down the Vegan Delight and picked up the Black Bean burger.

O M G it was delicious!! ..but it couldn’t be JUST the cheese. I ate some of the pieces, without the cheese, that had fallen off. NO, it’s the burger! Whaa…? I have never had a Black Bean Burger THIS good.

I would have NEVER thought a Black Bean Burger could win over a Beyond Burger.

Everything Burger in Marietta, Ga has been open for almost a year and should be on every Vegan’s must go-to burger joint list.
Support a local business who is offering Vegan Options!

link to What are Vegan Eggs Made From?

It can be unclear what exactly is on your plate when faux-animal products are involved. This is mostly because we tend to call vegan substitutes for non-vegan foods by the name of what they are...

Oreos are probably the most commonly used example of a conventional store-bought snack that happens to be vegan, purely by accident, but is it really true that Oreos are vegan? We’ve all heard...